Notes on the Waterloo-Pinckney Trail and our Weekend Backpacking Trip

Notes on the Waterloo-Pinckney Trail and our Weekend Backpacking Trip

Portage Lake is the western terminus of the Waterloo-Pinckney Trail. It’s an active lake with plenty of recreation taking place especially on a fine warm morning such as this. Time and location approximate. Photo by Andrew Mytys

You probably have read the trip report on our NOvember 7-9, 2020 backpacking of the Waterloo-Pinckney Trail. Some of my companions have made some cogent comments that I am going to address here in this post. They’re mostly expansions on things I wrote then and provide a bit more detail about issues you might also encounter if you decide to tackle this trail.

How to Hike the Trail

While there is something to be said for hiking east to west as your are leaving traffic noises behind the first several miles of the Waterloo-Pinckney Trail are shared with the Potowatomi Trail which is predominantly a bike trail. The general rule is bikers ride the trail east to west while hikers travel west to east. Even with this traffic management approach you need to pay attention to the bike traffic which frequently moves rather quickly and can be upon you before you know it.

The Waterloo-Pinckney Trail is blazed with dark blue marks. This is especially helpful in keeping you on track in the area where the horse riding trails abound.

Overall the tread of the trail is hard packed dirt. But during autumn leaves, especially oak, will lay thick on the ground. They obscure the trail and make the tread-way more slippery. The former attribute probably contributed to Doug’s ankle trouble as he hit a hidden rock. The latter made descents, some steep, more challenging than they would otherwise be.

In the vicinity of the Horseman’s Campground the Waterloo-Pinckney Trail is used by both people and horses. More or less bounded to the west at Katz Road and Loveland Road on the east the footing becomes increasing sandy and full of ruts as you move deeper into the area. It’s worst between the Baldwin Flooding and Clear Lake Road. You will likley find it tougher going than you expect from a examination of the topographic map.

For decades the trail made use of what it could to get where it needed to be. By M-52 that meant traveling up a private drive before entering state owned land and a proper trail. It also meant crossing M-52 which is a busy road.

This is definitely not a complete definitive list of water sources on the Waterloo-Pinckney Trail. There are certainly some sources that are going to be seasonal and I am not mentioning them. The ones I do cite I am pretty confident will be flowing, when water flows, year round. These water sources are not potable. They should be treated either through filtering, chemical purification, UV purification, or boiling.

From Portage Lake to Pines Campground

There are two reliable sources between the trailhead at Portage Lake and Pines Campground. There is no water at the campground itself and the water at the horse stables, about 0.5 miles away, is only available May 1 through September 30 1

Water is available at a decommissioned dam about 3 miles from the trailhead (well my GPS track has it further than that) but just east of Willis Road.

Water is available about 0.6 miles west of Pines Campground in the Baldwin Flooding.

You’ll go right by Crokked Lake and near Mills Lake. But you also cross over McClure Creek and North Fork of McClue Creek later in the section.

At the third intersection with McClue Road (going west to east) you’ll find a lovely water source but the ground is very soft and apt to suck your shoes off. Footing is better south of the intersection.

You can find water flowing in Lyndon Park after the pavillion. However, access can be tricky as you cross boardwalks above the water. I was able, with a stretch (and I’m only 5’4” or so), to reach my Sea to Summit Bucket down to fetch water. Mike stuck his trekking pole through the strap to later lower that same bucket to get a re-fill. There are a few places like this where you could fetch water but you won’t be able to just dip your water bottle in.

Water is available at Blind Lake which is 0.25 miles off the Waterloo-Pinckney Trail.

There is a water source about 0.3 miles east on the Waterloo-Pinckney/Pototwatomi Trail east of the junction to Blind Lake.

You can find plenty of information out there about the Waterloo-Pinckney Trail. A lot of it is not particularly current and the trail has seen some substantial changes over the years. As I’ve noted elsewhere reported trail mileage distances vary and while I do not claim my numbers are going to jibe with your experience I do believe they’re prety reliable and that it is a bit better to be a bit high rather than low as far as distance travelled goes.

I’ll share my GaiaGPS maps and if you want to find others I know of at least on track on CalTopo and I expect AllTrails has them too. Keep in mind that with the new re-route if you have older maps they certainly will not be current and even a recently downloaded map (November 9, 2020) doesn’t show the new re-route as Waterloo-Pinckney but does show that a trail is present.

These are PDF maps from the Michigan DNR that will certainly give you an overall sense of how trails connect with each other.

You must say at designated campsites. For purposes of backpacking the Waterloo-Pinckney Trail I’d suggest your options include Pines Rustic Campground (no water or ground fires), Green Lake, Blind Lake. There is camping at Portage Lake. Other campgrounds exist in both Waterloo and Pinckney Recreation Areas but aren’t on the Waterloo-Pinckney Trail. Keep in mind that campgrounds are spread out in both recreation areas so you will need to search both Waterloo and Pinckney when making reservations (Blind Lake is in Pinckney; the others in Waterloo).

start by talking about hiking style. Our breakfast break at Lyndon Park was planned and ran 45-60 minutes (some dispute on that but that’s OK; I know we took 2 hours 16 minutes in breaks on the third day). The lengthy break at Blind Lake was also pretty much decided upon as we approached the lake and no one complained. It can be tricky to meld disparate hiking styles together especially when some people are just going to always be slower than others. The point to keep in mind is that breaks do tend to consume time more quickly than you might expect. I knew our breaks on day 3 were about as long as they turned out to be. I was surprised that I used up about 70 minutes on day 1 though my time spent searching for the lost camera and then waiting for Doug to retrieve my glasses certainly accounts for a not insignificant portion of that time.

You had a chance to see some photos from the previous post but others took photos too and I did not include everything I could have. 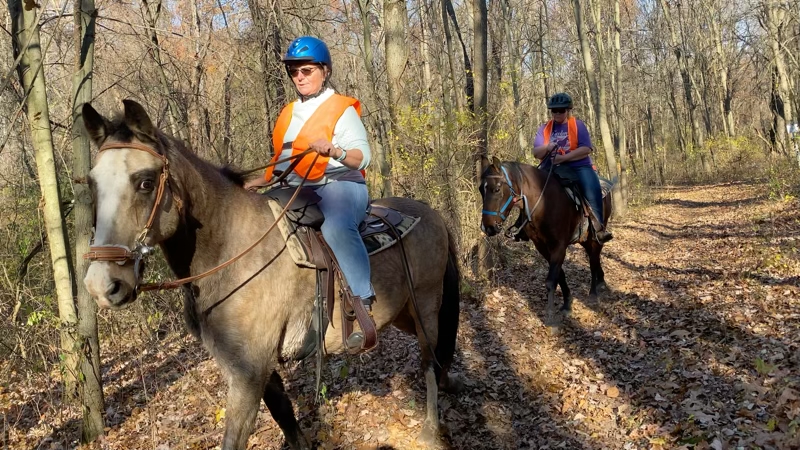 This twosome would raise the horse and rider count to 9. They were nowhere near the last horses we would see today. We would see quite a few Saturday morning as well. 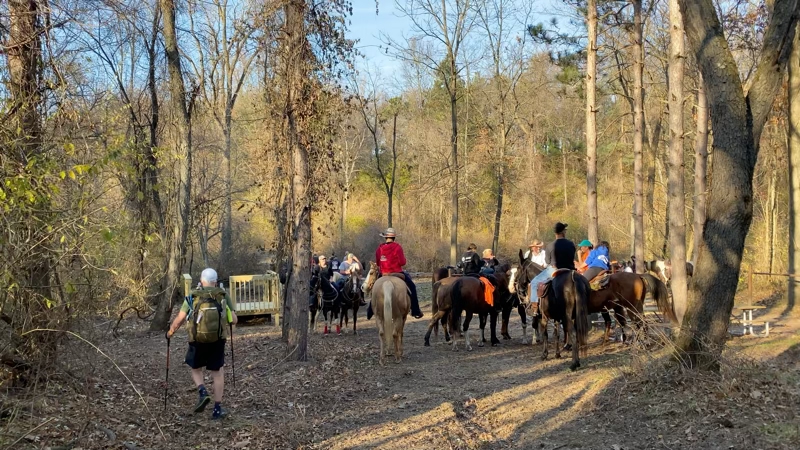 Our arrival on this scene of well over 20 horses and their riders milling about this stream. We could backtrack, not at all a short ways, or ford the stream. I was figuring on taking my socks off, sliping my shoes back on, and wading across. Doug was not keen on this idea. The horse people suggested they give us rides. Perhaps they said it with a joke in their hearts but they were serious and we took them up on the offer. I did less well than Doug. 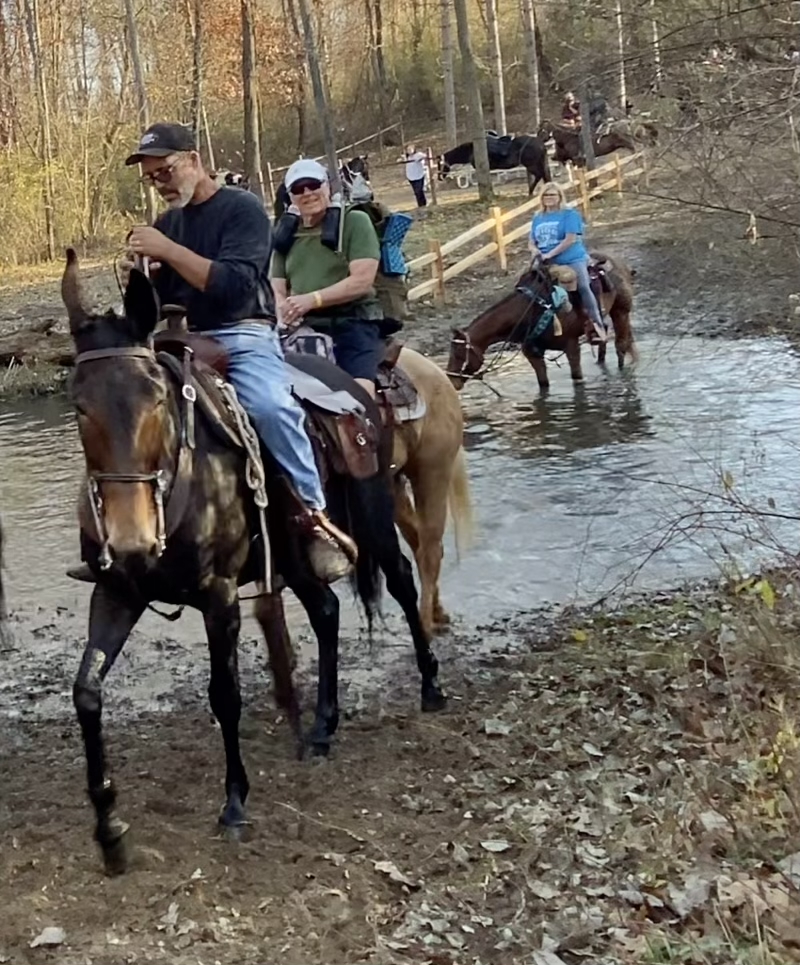 Doug looks a lot happier and more comfortable on his horse than I am sure I did on mine. I sat behind a fellow and he admonished me to, “breathe.” He may have been right to do so. There were easily a score of horses and their riders at this crossing. 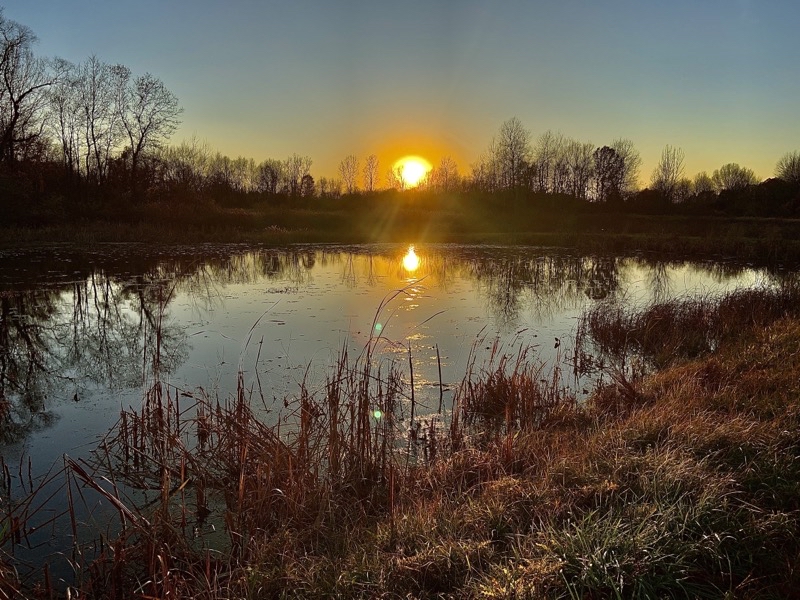 Baldwin Flooding. This is where you will find a decommissioned dam and access to water. It’s about 0.5 miles west of Pones Rustic Campground. Time is approximate. Photo by Mike Fogarty 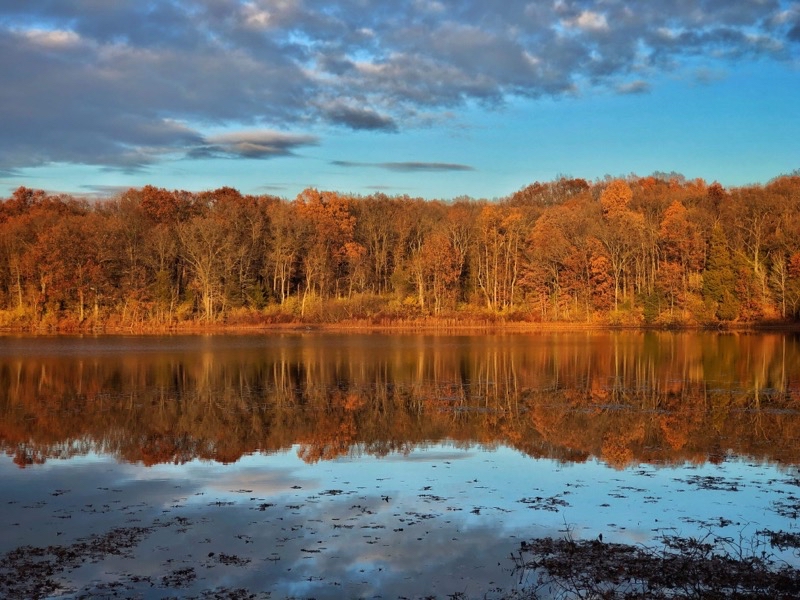 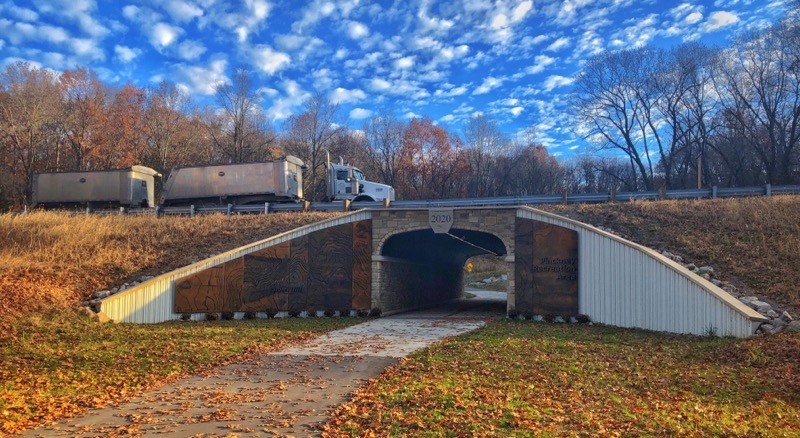 The tunnel that we now get to use to safely deal with M-52 and all its traffic. This is part of the new, as of 2020, re-route that gets the Waterloo-Pinckney Trail off private land and away from danger. Photo by Andrew Mytys 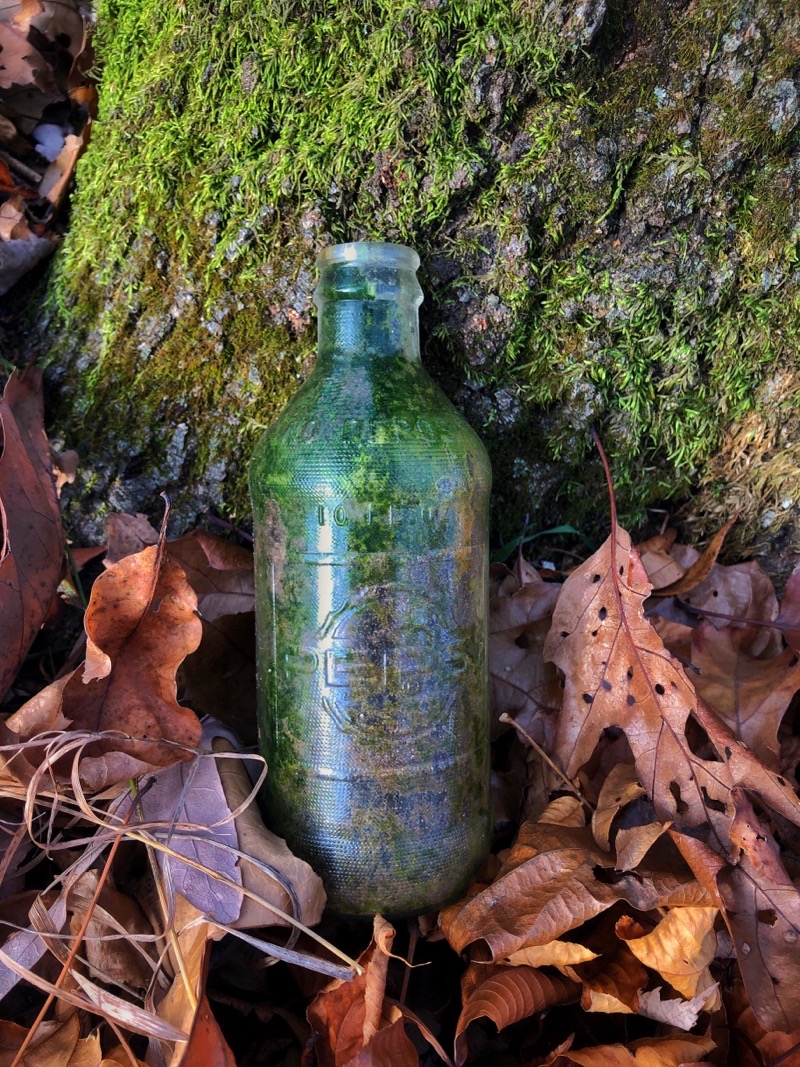 We were working our way through the tall grasses following a deer trail (yes, I could see it too) towards where we believed the Waterloo-Pinckney Trail had to be. At this point the trail is probably about 0.1 miles east of us. But this is an area that has clearly seen human visitation before. Perhaps not all that often as we suspect this Pepsi bottle is older than Andy or I. Photo by Andrew Mytys 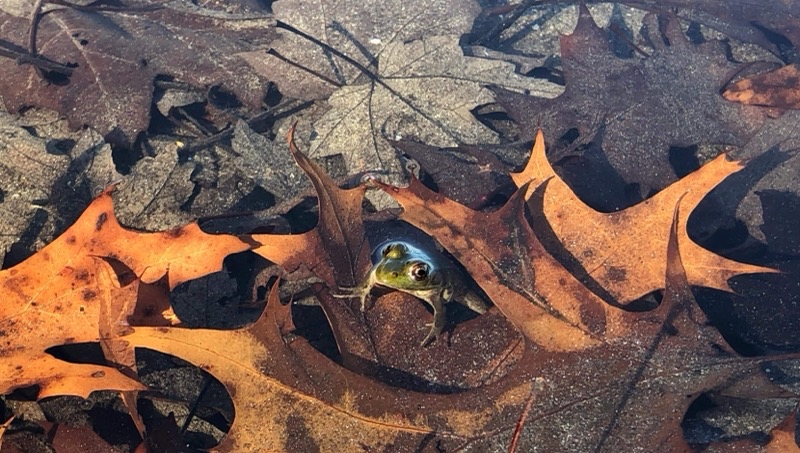 Blind Lake is a fine place to have lunch. It is a remarkably clear body of water as you can tell as you peer down upon this Leopard Frog. Phto by Ander Mytys 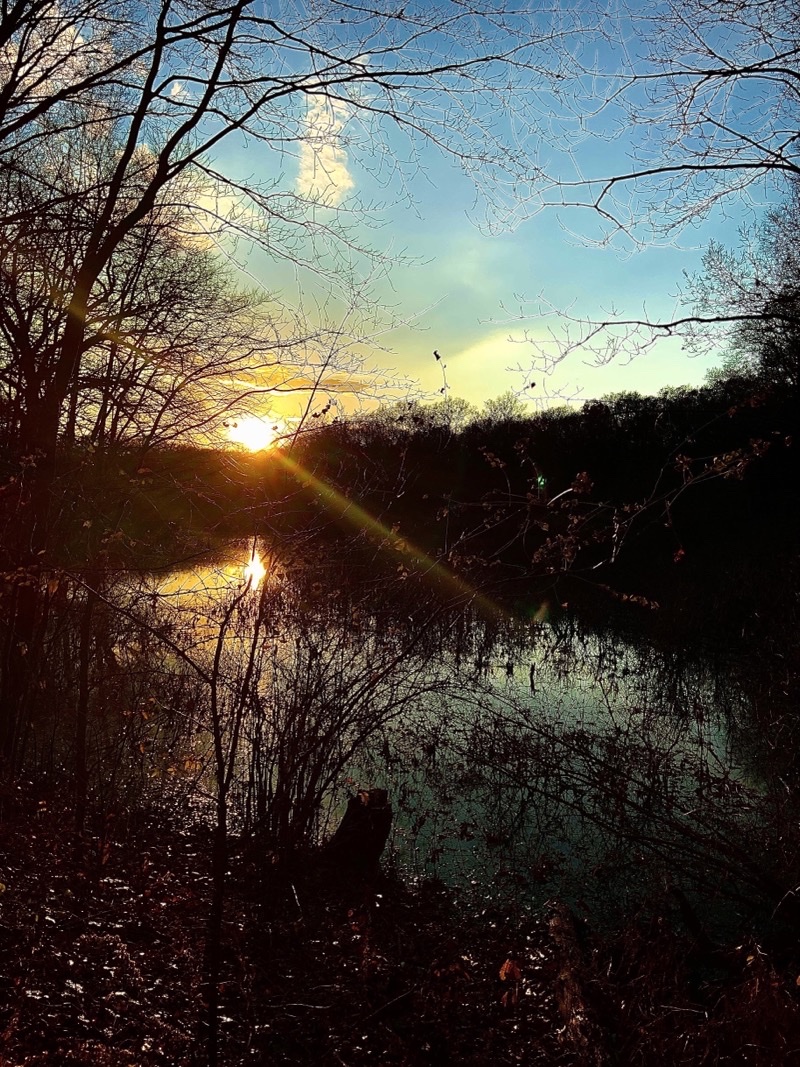 By the time I would reach this plant the sun was not glinting off of it as it is here and I doubt I was that far behind. This was taken probably around 4:40 PM. This is the last pond we would pass before ending our hike. Photo by Mike Fogerty.