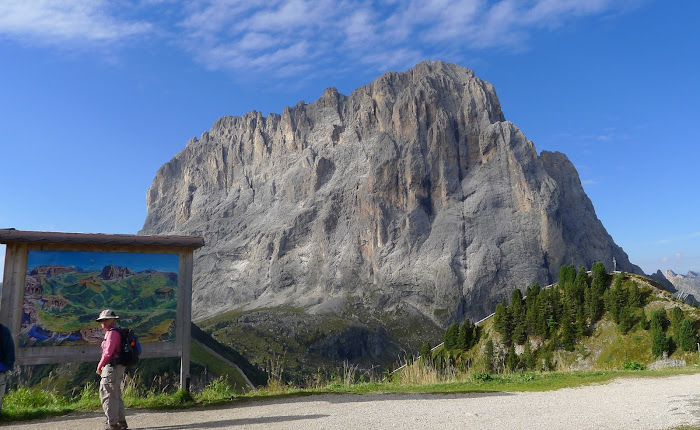 At the gondola station at Ciampinoi for the start of our second walk.

The walk today is reportedly 8 miles long gaining 2,500 feet and losing 3,000 feet. A good 1,300 feet of that ascent happen between the two rifugios over steep to very steep rocky terrain covering just under a mile. It would end up feeling like a longer walk than 8 miles but I don't have good track data to say if that is really the case. Perhaps it is merely an illussion in our collective minds since we were actually out considerably longer today than yesterday and even when you factor in the breaks and include the time spent on the two cablecar rides it felt like we had more break time yesterday than today. But I am getting ahead of myself.


We rode the gondola from Selva to Ciampinoi (sp) where we found ourselves with a superb view of the rugged Sassolungo massif. There are many wide and obviously well cared for trails leaving the cable-car terminus which has bathrooms and a cafe as well as ample places to settle down and just soak in the sun. No doubt scores of people do just that. After getting ourselves sorted out, a task that took a bit longer than it should have since Phillip had left his walking sticks (I think that is what he left behind) back at the hotel, we began walking down into the rolling valley approaching Sassolungo. Numerous cows were grazing in the valley below. The jingling of their cowbells was clearly audible as they moved their massive heads cropping the grass. The views of the mountains were impressive and we were having an easy time of it so far. 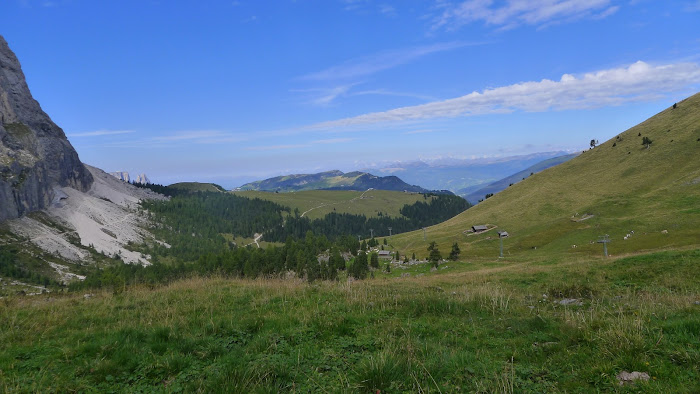 Soon our path would leave open ridge and climb up into a bit of forest. The path changed from the easy footing of a dirt and gravel-like path to a somewhat more rocky trail. It reminded me a bit of sections of Appalachian Trail in parts of New England. The going was a bit tougher here but hardly challenging. The change of scenery was nice. In the forest the temperature dropped several degrees as the sun did not penetrate here at this mid-morning hour. The only real downside to this section was the number of larger groups we had to share the trail with. This is a popular area. Some groups wwere far larger than our own. This would become quite clear when we left the forest for a descending narrow dirt path that contoured around the mountain affording us huge vistas. Overall the footing again was superb.

That path would eventually begin to switch back aand forth leaving the narrow contour to heading up-mountain towards the first rifugio. The switchbacks were wide and well built taking us steadily up. While not as gentle a climb as some I have done they were not so steep that you felt you couldn't make it. It just felt a bit long as you would constantly catch sight of the mountain hutte and think it is closer than it actually was. This big building nestiles against the shoulder of the mountain and has places for people inside and out. I don't know if it has beds but given it is at least two stories high I would not be surprised. Mountain huttes like this seem to be everywhere and all sport modern essentials including electricity and plumbing (i.e. flush toilets). I am unsure of the correct names for the mountain huttes. The signs confuse me. They note many place names and the trail numbers to follow to reach them but no distances are given. So, is the first hutte Vincenza or Demetz. Or maybe it is Sasso Piatto (we stopped at Vincenza and hiked up to Demetz). Whatever the case both rifugios were impressive places and certainly quite welcome. I suppose we actually spent close to a half hour at the lower refuge. People thoroughly enjoyed hot and cold drinks and a bite to eat. The apple strudel looked like big loafs of tasty goodness. But we had to push on up and over the mountain through the notch of rock where the second mountain hutte is located anchoring the upper terminus of what is affectionately called the coffin lift. This would be the toughest portion of the hike and is likely the toughest HF hiking segment I think we have done.

The scree and dirt switchbacks aren't too bad initially. Not realy much worse than what we had been climbing to reach the first hutte. You can see where we are heading and I suppose you know it can't last but you think it will. Within 20 minutes you know that it will be much harder. The gradient rises considerably and the switchbacks become considerably more rocky. You have to carefully pick your way along the path making sure you follow the faint signs that sometimes appear. It is definitely a tough climb that I have no doubt would have taken me far longer to negotiate had I had to do it alone. I had to pause a few times, sadly not to take photos or even catch my breath, but to have what I euphemistically call my "moments." That is my cute term for when my blasted body feels intestinal pressure and I just have to stop and hope it subsides so nothing worse can happen. I suspect the views back down the steep valley were impressive, though maybe a bit monotonous, but I never really looked back. I plodded on following others. It took nearly 90 minutes to reach the pass. I am sure many of the group got their considerably before I did and just a couple lagged a little behind. Sitting in the shadow of the massive rock to our west with the sun just peeking out you felt a definite chill in the air at just over the 2,600 (I think) meter mark. Having a nice hot drink or something in the hutte would have been great. I settled, like most I expect, for my packed lunch. 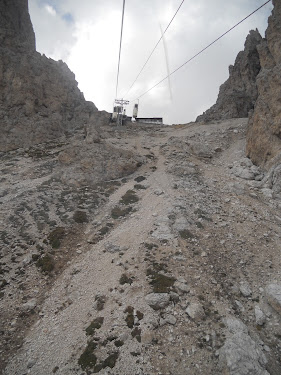 It was just after 14:30 when we began piling into the Coffin Lift cars. The people who work this lift hustle you in two at a time into these phone booth sized cubbies. They really shove you in and unless they have reason (like a legally blind adult male) the cars do not slow and you have to quickly hop up into the car before you are sealed in. The ride down actually doesn't loose all that much elevation given the length of the ride. At least if my tracking data is to be believe that is true. I am not so sure of that. I think we probably dropped most of what we had just ascended over the easily 20 minute descent. There are trails that wind up the mountain on this side and I admit they look far less daunting than what we had to deal with but that could well be an illussion. In many ways after getting off the cable-car at some little hamlet I think we would have been happy to take our leisure at the cafe here and then catch a bus back to Selva. We did not do this. Instead we began descending grassy slopes on narrow dirt paths. The most interesting part of this last several kilometers happened pretty early on. A group of people were playing huge horn pipes. Think of a pipe easily 8 feet long with a tiny curve at the end where the pipe mouth is. Somehow they get different notes out of these pipes, perhaps in the same way a bugler does, and the sound carries quite a long way. That was a nice treat to see and hear.

Sadly it was the last nice treat as the remainder of the walk was either on country lanes, eventually passing some massive construction - building of a resovoir for some reason. Then we paralelled a busy road on a narrow annoying path that followed a swift flowing stream with manmade whitewater rapids. It was a slog that I think we could have done without. The best part of the walk was everything up to the first hutte. I'll give you the ascent to the second hutte as well because you certainly do get a sense of accomplishment (and I marvel at the people who descended from that hutte especialy the handful of young children who probably are not only in better shape than I but also simply know no fear). But I would skip everything after the Coffin Lift dropped us off.

You can view all the photos for this walk here (14 photos).